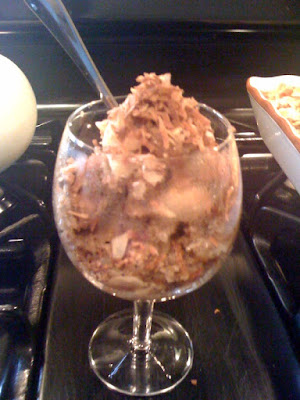 Bread pudding is the quintessential comfort food. All warm and redolent of cinnamon, spices, raisins, custard and sugar, it makes the ideal breakfast food. It very often reminds me of french toast with its "custardy" personality, so it is great for breakfast and brunch. Sometimes however, it is one note perked up with a "rum sauce" or "whiskey sauce" and that is okay, I just opt for the pudding itself to be able to stand alone with a good mix of flavors and textures. Sometimes it's too smooth, sometimes it's too sweet, like Goldilocks I was always looking for "just right." So here is my attempt to find the "just right" bread pudding...

I generally keep some variety of dried fruit: raisins, apricots, pears, peaches, mangoes which are flavorful and pack more of a punch in their dried form. For this version of my bread pudding I chose raisins, dried pears and combined them with orange and lemon zest, and the Granny Smith apple is for added moisture and flavor. I still kept some traditional flavor with the addition of extract and the expected spices. In my humble opinion the most important ingredient in bread pudding is the bread! For this recipe I chose an artisan bread that found at Whole Foods called "Seeduction." This bread has poppy, sunflower and sesame seeds and quite frankly it is not one of my favorites but ended up being perfect for the bread pudding. It lent a textural quality to the bread pudding and it merged well with the custard. It makes the bread dominate and not the custard. There are usually three types of milk in my fridge: soy, almond and buttermilk. I chose the almond milk to make the custard, and then topped the dish with sliced almonds as a complement and for added crunch. The serving you see is topped with toasted coconut (more crunch). I hope you enjoy this recipe it is addictive, flavorful, moist and has a great texture...and a little vanilla ice cream doesn't hurt either!

Ingredients
3 cups of bread (my choice was the grainy Seeduction bread from Whole Foods)
1/2 c raisins
1 Granny Smith apple, peeled and chopped
1/2 c of dried pears, chopped
zest of one orange
zest of one lemon
3 oz sliced almonds for the topping 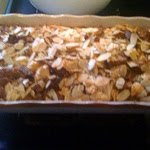 In a large bowl combine the bread, fruit and zest. In another bowl combine the ingredients for the custard and whisk until well blended and sugar is dissolved. Pour the custard over the bread mixture and combine thoroughly, and let the mixture rest until a lot of the custard has been absorbed by the bread. You can place this in the refrigerator overnight and bake in the morning, or let it rest and marry for at least 2 hours.

Oil/butter a a rectangular baking dish (13 x 7.5) and pour the mixture into the dish and top with the sliced almonds. Bake in a preheated oven at 350º for 50-60 minutes, and it should be "just right!" 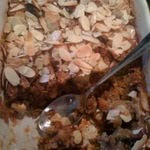 Carole E. Cooper
Aurora, IL, United States
I grew up in a family of cooks; all jockeying for their position in the kitchen and demanding their dish have a place of honor at the table. Culinary expertise was not simply the women’s domain, my father and all my uncles knew their way around the kitchen, and each were well known for their own signature dishes. My mom and dad had their own individual styles, as did my paternal and maternal grandmothers. I grew up with a curiosity about the magic that took place in the kitchen, I loved the excitement and thrived on the results. Looking back on those days they were very much like a fairy tale with a happy ending around the dinner table. A fairy tale that was told over and over again with a different twist at a different table with a different cook. This is my homage to those cooks before me and how much I remember about their special expertise. They made my childhood richer for the experience and shaped my culinary chops to this very day. My celebration of this fairy tale in food is Once Upon A Feast!

It's Not All About Food